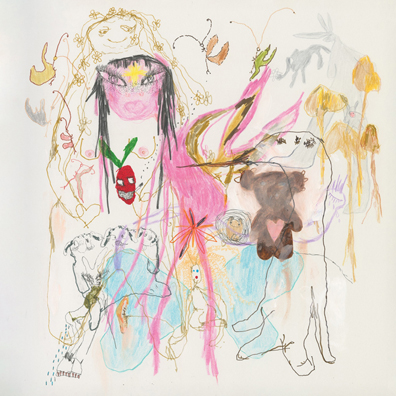 So far, it has been hard to predict what is coming next from indie rising star beabadoobee. Singer/songwriter Bea Kristi first burst from the indie underground in 2020 with an unexpected TikTok hit, “Coffee,” a sparse bedroom folk track and the first song she ever wrote. However, by the time it took off, she was already singing about how she wanted to be Stephen Malkmus. Meanwhile, Kristi’s 2020-released debut album, Fake It Flowers, had all of the trappings of a mid-’90s post-grunge revival, but at its core it was pure pop, capturing the era when alternative went commercial with a slick studio sheen. Finally, last year she paired with The 1975’s Matty Healy and George Daniel and went fully into the world of early aughts radio pop with the Our Extended Play EP.

Each of these projects showed the foundations of a promising songwriter, yet each also seemed more dedicated to reviving an aesthetic era than defining beabadoobee as a singular artist. In this respect, her sophomore album Beatopia is her most ambitious and well-defined effort.

In a since-deleted tweet, Kristi said Beatopia “might as well be called weed and shrooms.” From that description, fans are right to expect something more expansive and adventurous from Kristi’s new record, and on that front she delivers. Opener “Beatopia Cultsong” lives up to its name with its psychedelic vibe and noisy distorted drones, while “See You Soon” conjures a gleaming kaleidoscopic soundscape, finding Kristi delivering lovelorn lyrics over pillowy melodies. In contrast, “Ripples” offers an ornate chamber pop track, bolstered by starry strings, and “Tinkerbell is Overrated” diverts into bright, TikTok-ready electronic pop.

Coupled with that fuzzy psychedelic tinge, Beatopia also sees Kristi retreating back to a familiar world. As she describes, the name of the album came from an imagined land she created as a 7-year-old, one she has chosen to rediscover and bring to life. The resulting album is one that captures that childlike joy and innocence and reframes them into modern meditations, a therapeutic exercise that makes Beatopia familiar, simply catchy, and instantly nostalgic.

Kristi’s willingness to embrace this lighter touch also pulls out the strongest element of her music and puts it front and center: her relentlessly sharp hooks. Beatopia’s melodies feel elemental and immediate, so much so that they would feel obvious if they weren’t so very gratifying. Unsurprisingly, this also results in more aesthetic throwbacks to the pristine gloss of early aughts rock, especially with the record’s more upbeat cuts like “10:36” and “Pictures of Us.”

Meanwhile, later tracks such as “Lovesong” and “You’re Here, That’s The Thing” strip Kristi’s writing back to her acoustic roots, but now are paired with the record’s glossy melodic sensibilities that make them feel newly warm, full, and welcoming. Some of your appreciation for the record may be contingent on enjoying this style’s bright sheen, but Kristi undoubtedly elevates a pastiche of sounds from an oft-maligned era of rock and pop. Even at the time, few bands were writing songs as catchy as “Talk.”

Kristi takes an expansive approach to wistful pop throwbacks with Beatopia, constantly shifting her stylistic focus as the album winds on. However, this does leave the album feeling bloated in places, especially on tracks where the hooks are less prominent such as “The Perfect Pair” or “Fairy Song.” With these tracks, it becomes evident how much the album needs Kristi’s instinctually catchy songwriting to truly work.

But while the weaker moments can leave Beatopia a bit messy or overstuffed, there is nonetheless a special charm to Kristi’s simple songwriting. For a promising songwriter who felt like she has been searching for her creative niche, it is her most distinctive effort yet and also sports her most infectious set of tracks. It still feels like Kristi’s best album is still ahead of her, but Beatopia is an exciting step forward for beabadoobee and a tantalizing glimpse of where she might go next. (www.beabadoobee.com)