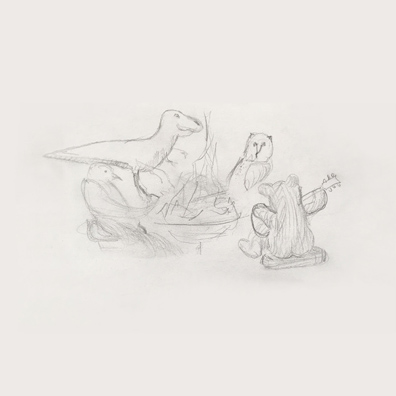 If anything, Big Thief and its members are prolific. In just over five years, the group has released four albums, including two in 2019 alone. Over the same span of time, vocalist and songwriter Adrianne Lenker has released three solo albums, guitarist Buck Meek has released two of his own, and drummer James Krivchenia has appeared on a who’s who of almost every other indie artist’s records. Added to this comes Dragon New Warm Mountain I Believe In You, a new 20-song double album that explores more territory than ever before.

Recorded in four different and far-flung studios, the group focused on certain styles in each environment and whittled things down to what appears here. Though lines can be traced through many of Dragon’s songs back to prior albums, two not-so-utilized approaches provide for some of the album’s best moments, most obvious and joyful of which are the three shamelessly countrified songs that feel pulled straight from a barn dance hootenanny. The beloved live set gem “Spud Infinity” finally gets its recorded due, replete with rubbery jaw harp and plenty of fiddle. The color themed “Red Moon” and “Blue Lightning” are nearly as infectious, with the latter’s bluesy two-step invoking the shuffle of boot heels across a sawdust strewn floor.

Perhaps most arresting, though, are the handful of truly folky, in the buckskin fringe jacket sense of the word, stunners. The band’s music has always been grounded in such roots, but the stripped down duets, with Lenker leading and Meek harmonizing, have not been heard so plainly on their full band releases. “12,000 Lines” is the loveliest of these, sharing an understated melodic line with Townes Van Zandt’s “Two Girls.” “Certainty” and “Change” are just as restrained and all the more gorgeous for it.

Touches of experimentation creep in on “Time Escaping” and “Heavy Bend,” while most other tracks are reminiscent of prior efforts. The mild distortion of “Love Love Love” points to Two Hands, “Little Things” shares the hazy hue of “U.F.O.F.,” and “Simulation Swarm” cozies up next to “Shark Smile” as having one of the group’s most grooviest of grooves. Whether Lenker is singing of life, death, sex, aliens, potatoes, or taking her revenge on a skillet of onions that made her cry, it all comes as naturally and organically as the band has always had a mastery for. If Dragon ends up being a fan favorite just for the fact that it has the most songs, the most sounds, and the ability to make you notice a new favorite each time through, that’s a perfectly fine way to view it. (www.bigthief.net)