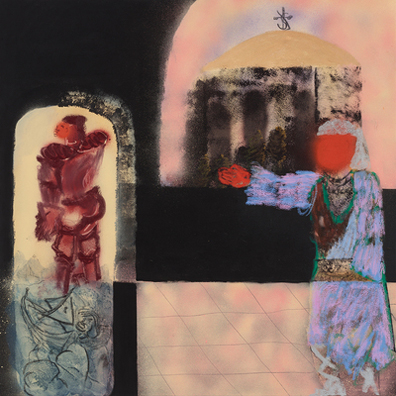 Fun House, the third album by Hand Habits (aka Meg Duffy, who uses they/them pronouns), is undoubtedly their best to date. Though it seems something of an affront to subject Fun House’s artistry to conventional measures or a stack ranking. Whether the album’s title is tongue in cheek; a reference to living downstairs from Sasami Ashworth (SASAMI) and Kyle Thomas (King Tuff) (who each had a part in the making of the album); or a reference to the “hall of mirrors” approach that Duffy takes in examining their life is of less matter than the heartfelt approach and dazzling dynamics that the album contains. Primary case in point being the chopped and quartered machinations of lead single “Aquamarine.” The heavily syncopated beat partially conceals the most personal of lyrics in the revelation of the suicide of Duffy’s mother and a lifelong search for tenuous connections.

The heaviness of Fun House’s lyrical content never detracts from the album’s musicality. This is no brooding or downcast affair, but one that doesn’t shrug off what it sets out to deliver either. Given the unanticipated gift of extended downtime during the pandemic, Duffy took their time carefully crafting and reworking these songs with housemates Ashworth (production) and Thomas (engineering) lending a hand. Ashworth arranged strings across the album, which lends a sonic depth to tracks like “The Answer” and “False Start,” giving them a Beatles’ Revolver-era melancholy swirl.

There are also gorgeous moments on Fun House as well, made more so by their lack of adornment. “No Difference” imparts some of Duffy’s most heart-rending thoughts, but is given an angelic, lighter than air lift by the chorus of performers that grace its gentle course. Likewise, the album closer (on the vinyl edition), “Graves” is punctuated by cascading acoustic guitar chords that underlay the song’s uncommon wisdom. The punchier side of the coin arrives on the Crazy Horse crunch that phases through “Gold/Rust,” as Duffy further sorts through the minimal traces left them.

Like a menagerie of the rickety carnival rides of old, it’s easy to get swept up in the array of what Fun House has on display. That the album also contains a gut wrenching inventory of Duffy working through their past without hammering you over the head with it, is Fun House’s best sleight of hand. Duffy sings of earrings inlaid with aquamarines, gifted to them, as a way to point to the ever increasing distance back to childhood and a parent barely known. An arc not unlike a song once gifted by legendary songwriter Guy Clark to his protégé, Lyle Lovett. “Step Inside This House,” detailed a meager legacy of a painting, a prism, a book of poetry, and a life spent picking guitar on the road. The objects that Clark wrote of were not Lovett’s, and Duffy’s story is not yours, but the emotional impact can be the same. Stepping inside Duffy’s Fun House could leave you agape in wonder or bawling your eyes out. It all depends on how you let it hit you. (www.handhabits.band)