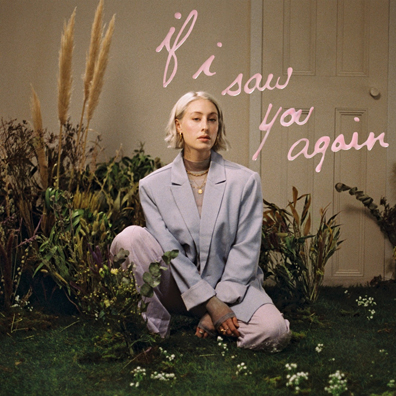 Violet Skies
If I Saw You Again
Self-Released

I first really became aware of Violet Skies (aka Hannah Berney) when I caught her performing at a festival stage showcasing emerging Welsh artists in 2016. Her voice and performance held the audience rapt, it was utterly mesmerizing and I remember musing that I had just been in the presence of an artist who had all the attributes to become “the next big thing.” But having a talent so huge that you could probably see it from space and being prepared to put in the work is no guarantee of success. Luck, timing and surrounding yourself with the right people can certainly play their part when negotiating the plastic hallways of the music industry.

After experiencing a series of unfortunate events involving bad managers and a relationship break-up Violet Skies returned to Wales in 2016 to ponder what to do next. However, it was her reaction to these events that proved to be transformative in shaping her future direction. “Suddenly I didn’t care what anyone thought, and I started to write honest songs,” she explained in the press release. Ultimately, this approach led to her being invited to songwriting camps, and she soon became an in-demand songwriter who has since co-written hits for Mabel, Tiësto, Swedish singer LÉON, and Diana Ross’s recent single “I Still Believe.”

At one songwriting retreat, she met producer Charlie McClean, which led to the pair launching sheWrites, a female-only writing camp with a mission to bring the best and most promising female producers and writers from around the world together. And yet, if events hadn’t arranged themselves in such a way, Violet Skies may have quit music completely.

Her debut album, If I Saw You Again, has been a long time coming and was again informed by fate, this time in the form of a global pandemic. After being stuck in L.A. on a songwriting trip, Violet Skies decided, with everything grinding to a halt, it might an opportune time to finally record her debut album. She also re-learnt to play the guitar, and this proved to be pivotal to the album’s overall sound.

If you find a lot of modern pop feels a tad overproduced, and rather too glossy then this is an album that provides unassailable proof that great pop music can flourish with a minimalist mindset. The subtle, nuanced, sophisticated production gives Violet Skies’ remarkable voice the space to breathe on a deeply personal album that feels intimate yet also relatable whilst addressing big themes such as love, loss, death, remembrance, healing, and the unpredictable twists of fate that life can throw at us.

Album opener “Settle”—with the refrain “There’s still snow in California/And Paris is on fire”—has the air of a timeless classic, a song that could have been written in almost any era. It was in fact written a few years ago, inspired by rolling news featuring the fire that engulfed Notre Dame Cathedral whilst California was under snow. “I was in L.A., watching the news and it felt like the world was ending,” says Violet. “It’s a warning not to settle for the state of how things are—whether in your own life or the world at large—just because it’s too much effort to change. It’s about urgency and time.”

The acoustic stripped-back “We Don’t Get Along” addresses the dying embers of a relationship, with honesty and emotional intelligence, whilst “The Internet” sees Violet moving on from her ex, yet still curious about how they have moved on as she explained, “When I first wrote about him I wanted revenge. But now I want to thank him, I hope he’s okay. If he hadn’t cheated on me, I wouldn’t be where I am now.”

“Hey God It’s Me” is a beautiful acoustic ballad with real emotional heft that sees Violet Skies trying to make sense of death and features a sample from her voice notes of her mum and her late nan laughing. Death features again on “What if One of Us Dies,” which despite the title is probably the album’s jauntiest number with perhaps a hint of gallows humor, whilst the soaring “Over the Valley,” written from her late nan’s perspective, and bittersweet break-up song “Love You Better (Go),” have future pop ballad classics written all over them.

It’s a perfectly judged album that showcases her skills as a producer and a songwriter of huge warmth and empathy. It also highlights her incredibly beautiful and emotive voice, one that would surely induce emotion in even the most committed, hard-hearted professional cynics. (violetskies.komi.io)