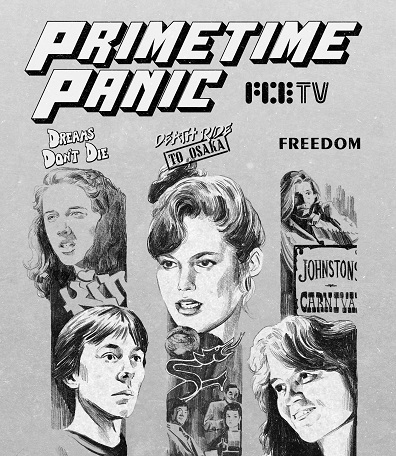 Juvenile delinquency, drug trafficking, carnies, and the international slave trade—these are a few of the dangers that beset our youth in the early 1980s, and are highlighted in this set of quality made-for-TV movies that have been restored and reissued on the Fun City Editions Blu-ray label.

The most lurid of the bunch, Death Ride to Osaka (a.k.a. Girls of the White Orchid, 1983), stars Jennifer Jason Leigh as Carol, an aspiring teenage singer with significant talent but not a lot of common sense. She seizes upon a too-good-to-be-true opportunity to gain professional experience performing at night clubs in Japan, signing a contract to head overseas for a few months’ worth of work. Little does she realize that the job is a tightly-fashioned ruse to get the helpless young girl into an unfamiliar country, and that the Tokyo nightclub employing her is actually a brothel controlled by the Yakuza. As the grim reality dawns on poor Carol, some fellow captives are inspired to win their own freedom—only to be shipped off to Osaka, where they’re subjected to endless, demoralizing abuse. It’s a bit shocking to think that this was a television movie until you learn that two versions were prepared: a smoother-edged, gentler version for TV, and a more explicit cut (seen here) for foreign theatrical distribution. Jennifer Jason Leigh is predictably great in this early role, and any film featuring both Mako and Soon-Tek Oh—two of the ‘80s most ubiquitous Asian character actors—is lifted by their presence, but Death Ride to Osaka is probably the weakest of the TV movie trio found here, if only because its imperiled heroine is so frustratingly gullible that you want to reach out and shake her. The film is still entertaining, but geez—we were grateful that the troubled teens of the other two films are a bit more sensible.

Freedom (1981) follows Mare Winningham as Libby, the eldest daughter of wealthy, divorced parents. (Like Carol from Osaka, she’s an aspiring singer-songwriter—her songs were penned by Janis Ian.) After too many clashes with teachers and law enforcement, Libby convinces her mother to sign emancipation papers so that she, barely sixteen years old, can live and work on her own. This lasts a few good weeks before Libby is seduced by the free-spirited carnies of a traveling fair, and she runs away to join the carnival. Her mother (Jennifer Warren) worries for her daughter, who works the midway and sleeps in the back of semi-trucks alongside dirty, long-haired friends with delightful names like “Wizard” and “Whiskey.” But, the circus life—with its free love, and rootless lifestyle—is not all it appeared to be at first to the starry-eyed teenager, and Libby discovers she’s not cut out for the carnie life after all. Another moral tale inspired by a true story, Freedom is far more heartfelt than you’d guess based on its slightly goofy premise. Shot in a real carnival and using a mixture of actors and real-life circus folk, Freedom is a surprisingly tender drama—not just during the fair scenes, but in the relationship between a mother and daughter who love each other immensely, but can’t help clashing whenever they come together. It’s heartbreaking, and both Warren and Winningham do a wonderful job of conveying this difficult connection. The fun (and authentic-feeling) carnival backdrop provides colorful set dressing for this small, well-executed drama.

The most thrilling film of the pack is Dreams Don’t Die (1982), which pits a pair of teenage lovebirds against a nefarious, fifteen-year-old drug lord. Danny (Ike Eisenmann of Disney’s Witch Mountain movies) is a mild-mannered high school kid by day, but at night he becomes “King 65,” one of the New York City’s most respected graffiti artists. Teresa (Trini Alvarado) loves him, but after a lifetime in the foster system, she wants out—away from the city, away from the crime, away from poverty, to a place where she can see a future for herself. Concluding that her beloved Danny has no ambitions beyond illegally tagging whatever surface he can reach with a spray can or marker, the former good girl links up with the flashy drug dealer “Captain” Kirk (Israel Juarbe), a fearless young ruffian who thinks the police can’t touch him ‘til he turns sixteen. Our heroes’ lives are turned around by the generous nature of a concerned cop named Charlie Banks (Terminator’s Paul Winfield), who personally invests himself in their predicaments. With a future finally in sight, Danny and Teresa turn their attention to freeing themselves from the cruel grip of the wicked Captain Kirk. Dreams Don’t Die was shot in early ‘80s New York, a setting that proves time and again that it was as photogenic as it was trashy. We’re treated to a ton of graffiti-covered train interiors, litter-strewn subway platforms, and crowded streets—even the ominous, distorted guitars we hear on the soundtrack help this teen-centric movie feel like it was set in the same NYC stalked by Paul Kersey in the Death Wish series. Danny’s murals were painted by the late DONDI, one of the city’s most iconic graffiti artists. The last act of this made-for-TV urban fairy tale, which is dedicated to our heroes’ complicated plot to bring down their over-the-top adversary, is genuinely exciting.

All three movies have been newly restored in 4K, and probably look better than they did at any other point in their screening history. The set includes a nice array of extras, such as crew video interviews for Osaka and Freedom, a video essay on the former, and audio commentaries on all three. As with any set where the films are as varied as these, reactions will be subject to an individual’s tastes—it’s certainly possible that viewers will rank the movies in a different order than we did. All three, however, were worth preserving, and it’s nice to have a set like this to bring them wider attention, and prevent them from undeservedly languishing in obscurity.