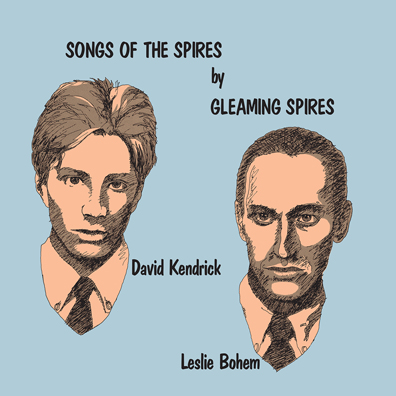 In the early days of New Wave, drummer David Kendrick and singer Leslie Bohem approached the Mael brothers of Sparks at an LA coffee shop and invited them to check out their popular live act, Bates Motel. Rather than help getting a contract, as they likely hoped, the Sparks brothers instead invited Bates Motel to become their backing band for an upcoming world tour. It was an offer the working musicians couldn’t turn down, but it led to the dissolution of Bates Motel—and the eventual rise of Gleaming Spires.

Written mostly by Kendrick and Bohem while on the road with Sparks, the demo tape that became Songs of the Spires was recorded on their return home. The brass at Posh Boy Records loved the songs as-is, and rushed it out as an album. Meanwhile, the massively tongue-in-cheek “Are You Ready for the Sex Girls?”—Gleaming Spires’ most enduring legacy—got some play on the local airwaves, creating buzz for the band in Los Angeles. “Sex Girls” became a staple on the soundtracks of ’80s films about horny teens—including The Last American Virgin and Revenge of the Nerds—which is how most people remember the band nowadays, if at all.

Songs of the Spires is a fine showcase for a pair of pop minds who, like Sparks, are difficult to lasso into a single subgenre. With the chilly synthesizer sound and catchy hooks present through much of the record, it’s easy to understand how they got lumped into New Wave, but on closer inspection their playfulness with structure and some subtle experimentation with tape loops give them more in common with certain post-punk acts of the era. Tracks like “How To Get Girls Thru Hypnotism” and the aforementioned “Sex Girls” stand out for their unabashed goofiness, and provide the album with a no-fucks-given kind of attitude.

The efforts put into Omnivore’s reissues campaign is nothing short of awesome: the packages include booklets packed with essays, archival photos, lyrics sheets, and song-by-song breakdowns that are as much an attraction as the long out-of-print albums themselves. (The booklets would put many Criterion Collection leaflets to shame.) Their release of Songs of the Spires includes an oral history from Bohem and Kendrick that lays out the group’s origins through the release of this record, as well as six tracks from their preceding band, Bates Motel. (Also included is the band’s early EP, Life Out on the Lawn, on which they made the wonderfully weird choice to cover “Somewhere” from West Side Story.) Because it contains “Sex Girls,” Songs of the Spires is probably the one LP from their trio that listeners would grab first—although, because of its genesis as a demo tape, it lacks the studio polish of the two that followed it. (www.omnivorerecordings.com)