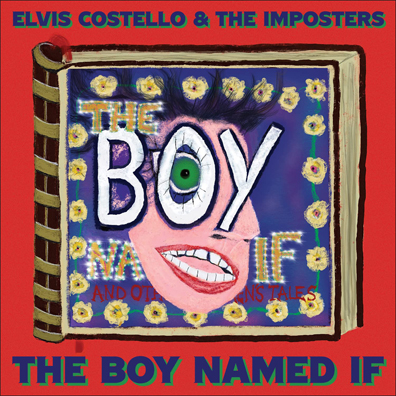 Elvis Costello & The Imposters
The Boy Named If
Capitol/EMI

At this point in Elvis Costello’s long, storied, 45 year professional career, it’s a cliche to label any new album of his that sounds like this to be his best since *fill in the blank* or his first “rock” album since that same *fill in the blank* or a different, earlier album. In this case, though, it must be acknowledged that this brand new album by Costello and his long-running (since 2001) backing band, The Imposters (which is really just three fourths of Rock and Roll Hall of Famers Elvis Costello & The Attractions with bassist Davey Farragher replacing Bruce Thomas), will remind many listeners of earlier works from this quartet, particularly 2004’s The Delivery Man (the first album officially credited to Elvis Costello & The Imposters) and to a lesser extent, 2008’s excellent follow-up Momofuku. While those two albums are full of social and political lyrics, the lyrics here seem to be more abstract personal observations focusing on relationships with the exception of “Mistook Me for a Friend,” with its references to “a pocket full of Presidents” and “petty cash and criminals,” but even then, there are few explicit references to what has been going on in the world in recent years.

Though it doesn’t really showcase that album’s country/roots influence nearly as much, the parallels to The Delivery Man, in particular, are noticeable. “What if I Can’t Give You Anything But Love” will remind listeners of that album’s “The Name of This Thing is Not Love.” Elsewhere, “The Death of Magic Thinking” reminds of Momofuku’s “No Hiding Place,” another lament on the loss of wonder, innocence, and privacy in the modern age. “The Difference” even reminds of “My Little Blue Window” from 2002’s When I Was Cruel, the first album to feature The Imposters as Elvis’ backing band.

It must be said that for those longing for the classic late ’70s Elvis Costello & The Attractions sound, The Imposters have now been a unit for decades, long enough for them to also reference their earlier work just like The Attractions did on 1994’s Brutal Youth, an brilliant album by the then 40-ish Costello also considered a return to form at the time. The last few songs provide a necessary sonic balm from all of the sturm and drang as they are both beautiful ballads, penultimate “Trick Out the Truth” reminding of Momofuku’s “Mr. Feathers.” All in all, this is yet another strong album in a career full of them and while he doesn’t reinvent the wheel or break much new ground here, any chance to hear the master play the style he’s so good at is not to be missed. (www.elviscostello.com)