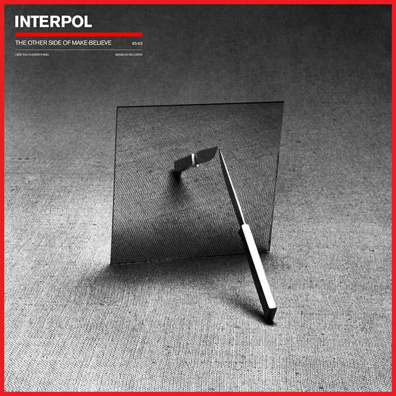 Interpol
The Other Side of Make-Believe
Matador

During the making of Interpol’s seventh album, The Other Side of Make Believe, lead vocalist Paul Banks was grounded for nine months in the Scottish capital, Edinburgh due to the pandemic lockdown. No, thankfully there’s not any bagpipes that have made the cut or any reference to kilts in the lyrics. The LP was, as in most recent cases, conceived remotely across various locations during 2020, refined in New York state’s Catskills, and finally completed in north London. Alan Moulder (Nine Inch Nails, Depeche Mode) is once again on board, but on this occasion shares the production duties with Mark Ellis, better known as Flood.

On “Fables,” Banks sings “The circular rise of guileless angels say all is fine.” His flair for abstraction and disguise remains in full force. The chorus twists and bends, oscillating between melody and discord. Daniel Kessler’s guitar sleazily slithers and snakes.

There is almost a fragility from Banks on the opening track, “Toni.” Sam Fogarino’s thumping drumbeat with accompanying piano provide an attention-grabbing intro. Kessler’s ’80s style guitar licks close it out with panache.

“My nature made me great, but not that great,” hollers Banks on the turbulent and psychedelic “Greenwich.” Kessler’s guitar on “Mr. Credit” is edgy and razor-blade sharp. It has the heaviest intro on the album with a funk-fuelled verse. Another strong offering is the yearning and reflective “Gran Hotel”.

The beat and keys on the haunting “Something Changed” is appropriately out of sync with lyrics to match—“I want to see the kind of place they’d lay for me/I got a numb skull, I got a green heart.” “Renegade Hearts” and “Passenger” are hopeful and soaring. “Big Shot City” is intentionally jerky with an air of menace, whereas album closer “Palermo (Go Easy)” is one of the weaker songs and a disappointing one to finish on.

The stratospheric success and acclaim of the first two Interpol albums, Turn on the Bright Lights (2002) and Antics (2004), set some lofty standards. In truth, their subsequent projects have come up short in comparison. As Banks sings in “Toni,” “The aim now is perfection always.” Interpol has never been about perfection. The band made their mark by capturing the seedy NYC zeitgeist, creating a mood, a spirit, a kind of frenzied, twilight energy. There is no doubt that The Other Side of Make-Believe remains distinctly Interpol, and that is a good thing. Twenty years on from their debut, the band have endured, continuing to produce tight rhythms and shadowy urban soundscapes. (www.interpolnyc.com)