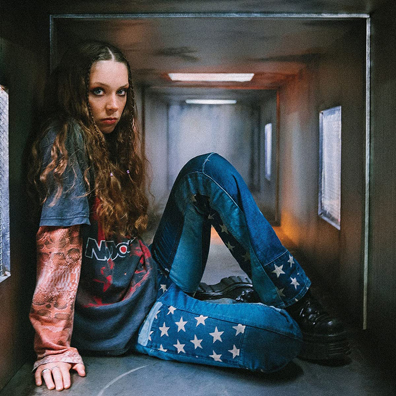 Twenty-one-year-old U.K. artist Holly Humberstone follows up her critically acclaimed debut EP Falling Asleep at the Wheel with another six-track master class in expressive, emotive relatable pop. The Walls Are Way Too Thin EP provides proof positive that Humberstone is perhaps the brightest Gen Z singer/songwriter to emerge from the U.K. in quite some time. And it’s that “relatability” that has helped Humberstone build a huge following during lockdown. Despite being unable to play live for a large portion of 2021, her songs have garnered over 150 million streams globally. She was nominated for the Ivor Novello Rising Star award and was voted as the BBC’s Sound of 2021 runner up. In October 2021, she played her first sold-out U.S. shows as well as appearing on The Tonight Show Starring Jimmy Fallon, and her latest offering will undoubtedly cement her reputation further still.

The EP deals with a sense of displacement, of messy relationships, of things falling apart, both physically and emotionally, and attempting to move on whilst trying to find your place in the world. The beautifully tender “Friendly Fire,” which she recently performed live at the Shepherd’s Bush Empire in London where she was joined on stage by Bombay Bicycle Club’s Jack Steadman, details the conflicted emotions of trying to extricate yourself from a relationship you’re not committed to but still care deeply about the other person. Previous single “Scarlett” is about the end of a toxic relationship in which the titular character discovers “We go together, like bad British weather” and works through the relationship as she rediscovers her self-worth.

The EP’s title track, “The Walls Are Way Too Thin,” shows exactly why she’s struck a chord with her fans, as Humberstone negotiates her own emotional truths with empathy, emotional intelligence, and compassion. She crafts music that on the surface can sound straightforward and almost minimal and somehow transform it into something epic and profoundly beautiful, as demonstrated by the heartbreaking “Please Don’t Leave Just Yet,” a song co-written by The 1975’s Matty Healy. The eerie “Haunted House” has an almost Regina Spektor feel, and her take on what the modern singer/songwriter should be involves subtle yet shimmering electronic flourishes, samples, beats, and wonky synths—which lend a fresh and exciting feel to proceedings. This is contemporary yet timeless music of startling beauty and candour that anybody whose heart isn’t made of lead can relate to. Communicating her feelings via music is something that seems to come as second nature to Humberstone, who admits to being socially awkward and who often finds it easier to express her feelings via music rather than having a conversation. On the evidence of her hugely impressive output, so far Humberstone is undoubtedly a star in the making. (www.hollyhumberstone.com)